After a few wonderful days in "The rose of Northern Thailand" we had some serious tanning business to undertake. So we set course for Hua Hin by air and by road.

First leg was on one of those colorful NOK Air planes again. I was really looking forward to it - as this great airline always provides a fun flight.

This flight was booked some five days before departure, and a seat in Nok Economy set me back 4980 baht (165USD / 120EUR) - which is actually more than my Nok Plus flight a few days before. But hey - that's the law on supply and demand! And the fare included a 15kg free baggage allowance, as well as the option of selecting my seat online right after booking.

Upon arrival at Chiang Mai International Airport (CNX), we were well prepared for the usual hassle of bag screening at the entrance. Luckily - despite quite a long line - we didn't have to wait more than ten minutes.

Inside the bright and airy check-in area, Nok Air was easy to spot! There were nobody ahead of us in that line, as opposed to the lengthy check-in lines of "Asia's Boutique carrier" a few metres away. 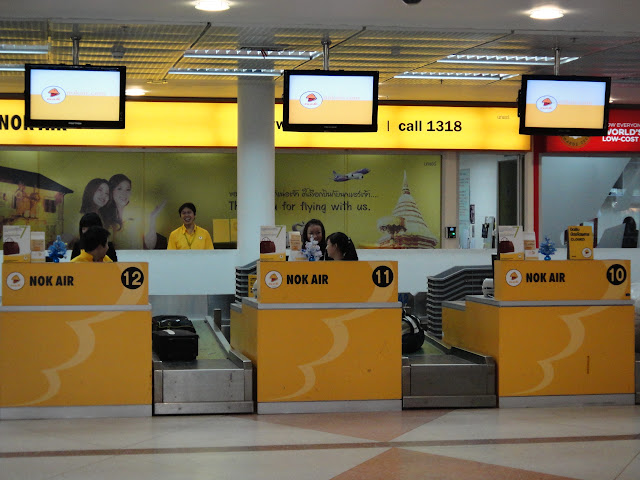 The newly upgraded check-in area hosts a small coffee shop (with free WiFi) and some souvenir shops. The departure area is located one level up. On the way to the escalator, this departure screen makes it quite obvious that CNX is an interesting airport, with a great selection of Asian destinations. In fact, Thailand's second city is becoming increasingly popular with tourists from all over the world. 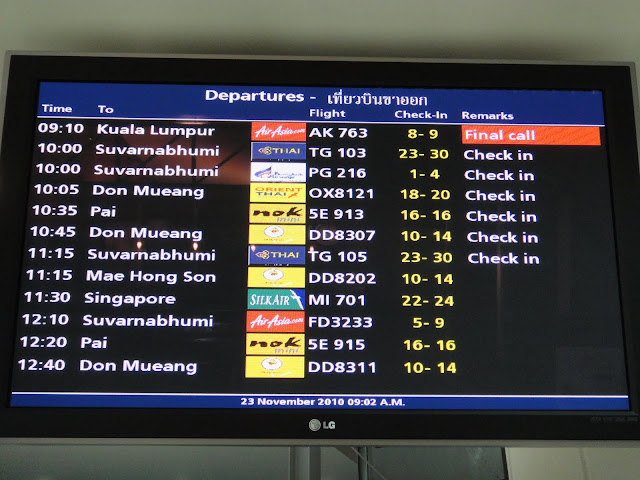 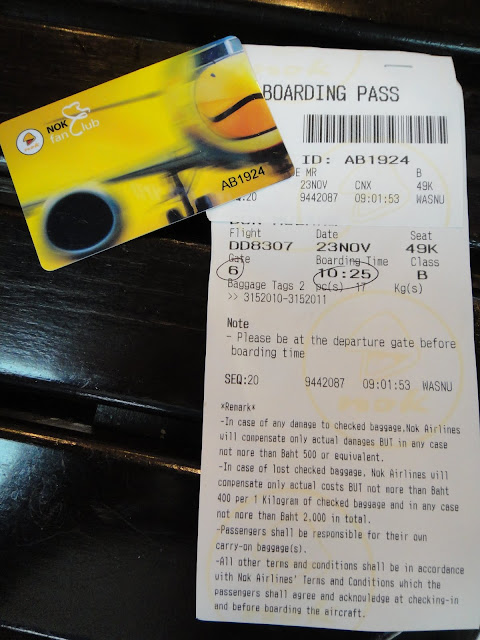 A nightmarishly long line was awaiting us in front of the ID- and boarding pass check point. Fortunately, the NOK Air check point was conveniently located for us to sneak by the entire queue. Right after this, another security checkpoint and then we were allowed to enter the departure hall. I think it is safe to say it was crowded! This was due to very frequent departures for Bangkok by a One-Two-GO (OX) MD82, a Bangkok Airways (PG) Airbus A319, and a THAI Airways (TG) B747 and an A300. 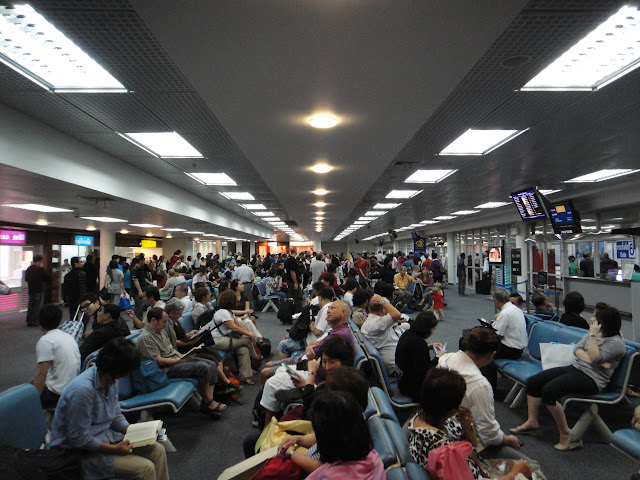 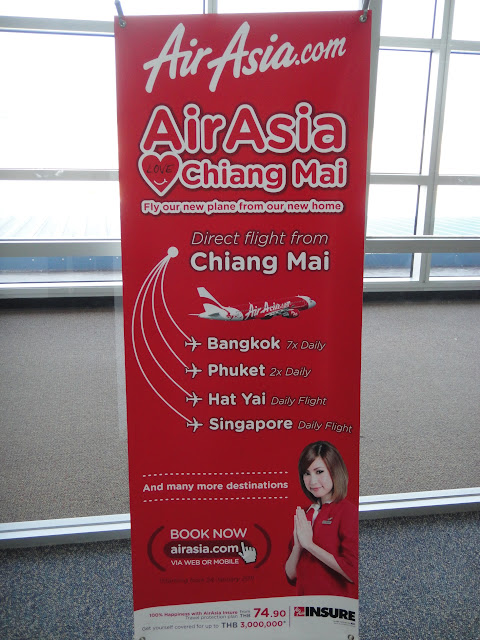 In fact, departures were scheduled so tight that TG's 747 from BKK hadn't even taxied out before next departure parked at gate. Seen here is A300 HS-TAM (appropriately enough named "Chiangmai") arriving from Bangkok. 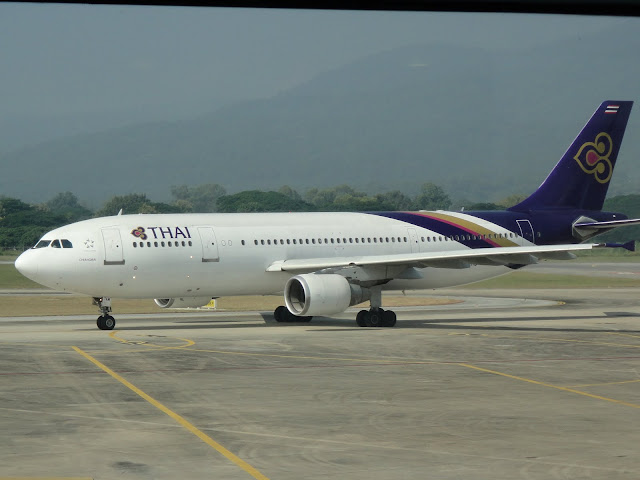 Three goodies in one photo here! We see a private Dassault Falcon 900EX registered VT-AKU. Pictured here is also Royal Thai Air Force in the background. I don't know much about military aircraft. Could this be a Hercules? By all means - let's not forget HS-TGH "Chaiprakarn" sneaking out to RWY18 on its way to Bangkok. 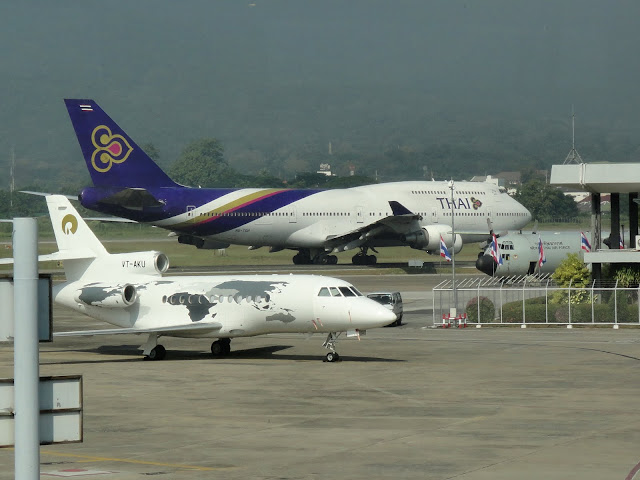 Boarding commenced at 10.30, and this cheerful sign made sure we had no doubts where we were going. 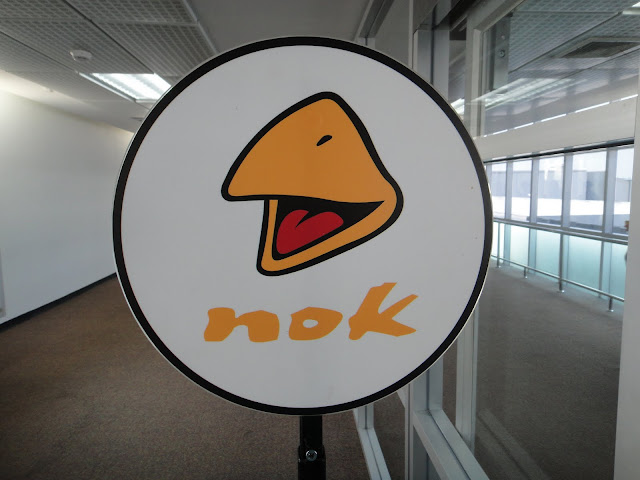 We installed ourselves in seat 49J and K, and happily concluded that legroom was more than adequate onboard this ex-Thai Airways B737-400. Still, being a low cost airline, NOK Air has opted for some interesting twists - such as using the overhead bins to advertise their onboard food concept Nok Aroy (interestingly, I had tried to order hot food at an extra fee at time of booking, but this option did not work). 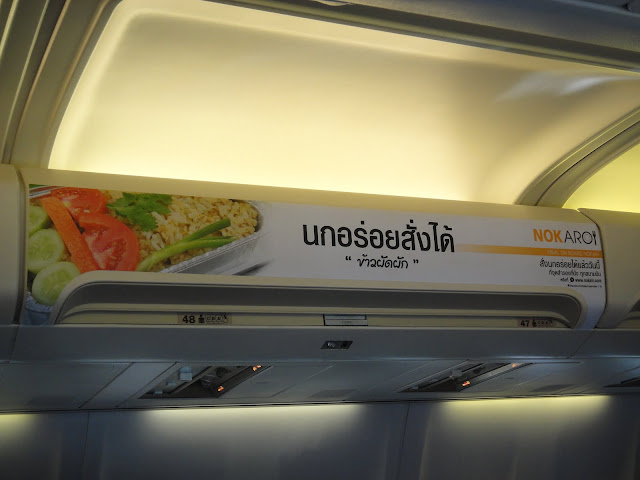 Pushback started on time - at 10.45 - and lots of interesting aircraft got into view. A couple of examples here:

Taxiing out to holding point for RWY 18 we passed this veteran aircraft - parked on the premises of the 411-squadron. 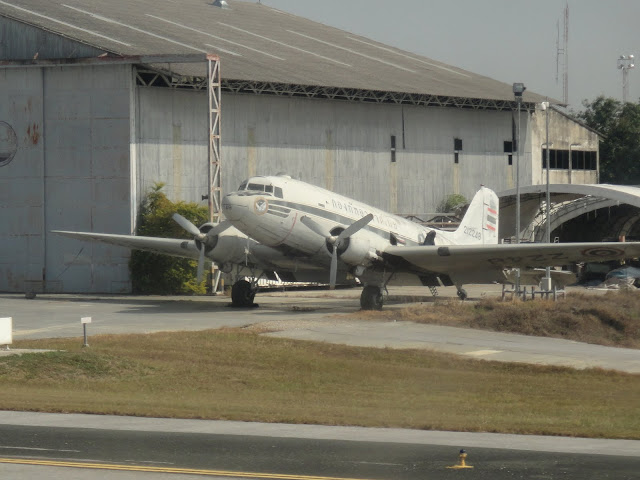 In-flight entertainment: A yellow safety card (I make a point of always - always - leave these onboard, no matter how pretty they are. Please don't steal them!) as well as the Nok Air inflight magazine named JIB jib - meaning "twitter" in Thai. 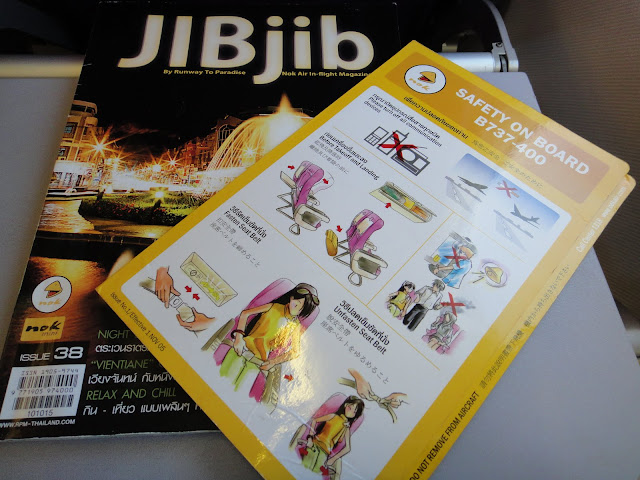 As mentioned in my trip report from my outbound flight from Bangkok, Nok Air has a nice touch of introducing each member of cabin crew by nickname. Meaning "bird", Nok is a very popular nickname in Thailand, and this airline actually gives all its crewmembers the name Nok as an add-on to their usual nicknames (Thais are generally referred to by their nicknames, rather than their given names which can be quite a tongue-twisting exersise.) 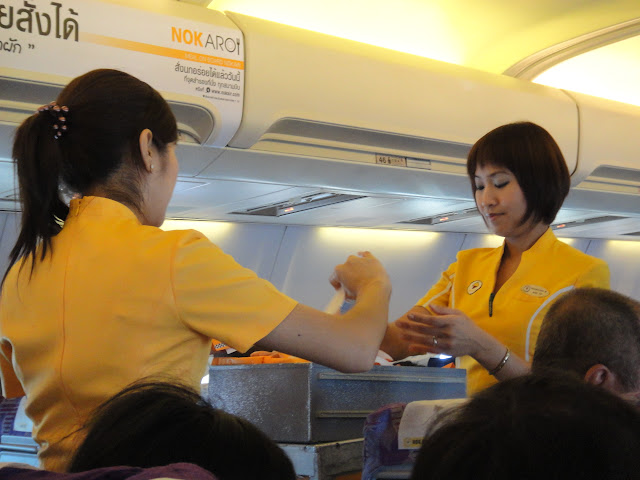 Again, Nok Air distinguished itself by offering a free snack even in economy class. Today's snack was a kind of mini-pizza, or more accurately some kind of soft bun topped by ham and mayonnaise. This was definitely not a culinary highlight! But it was quite filling - and of course free of charge - so we managed to wash it down :-D But why do they constantly warn us not to leave evidence? 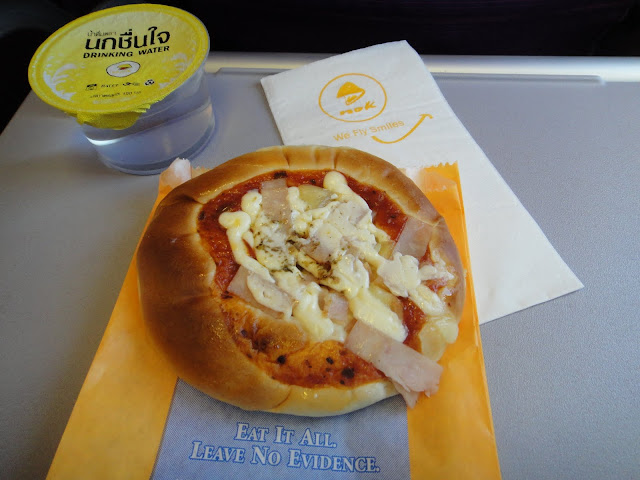 This snack offering was followed by the drinks trolley, from which the offerings were pay-only. A cup of drinking water was, however, offered together with the "pizza". 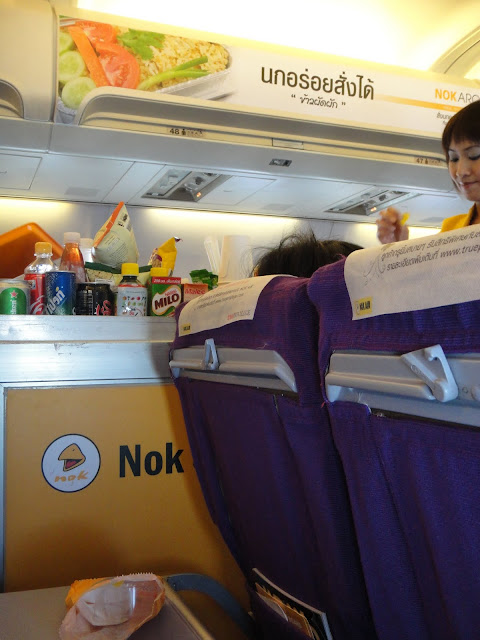 The JIB jib magazine also doubled as a Nok Air timetable, menu and Nok Smile Shop price list. There were plenty of useful, and not-so-useful logo items for purchase, some for as little as THB60. 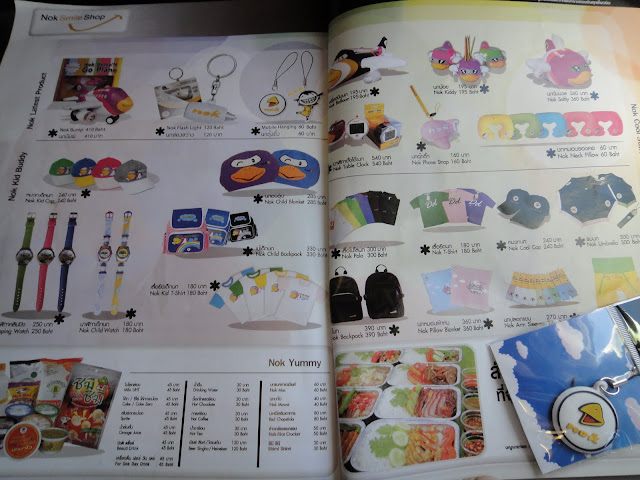 At 33.000 feet, somewhere over Sukhothai, our captain speaking offered a short briefing including location, cruise level and weather forecast for Bangkok- which promised a pleasant 32 degrees celcius.

We touched down at DMK runway 19R at 11.40, following a smooth and uneventful approach. It didn't take much more than one minute from rolling off the runway untill we were parked at our gate.

The airport was disturbingly empty - but isn't it a Boeing 747SP hiding in the background? 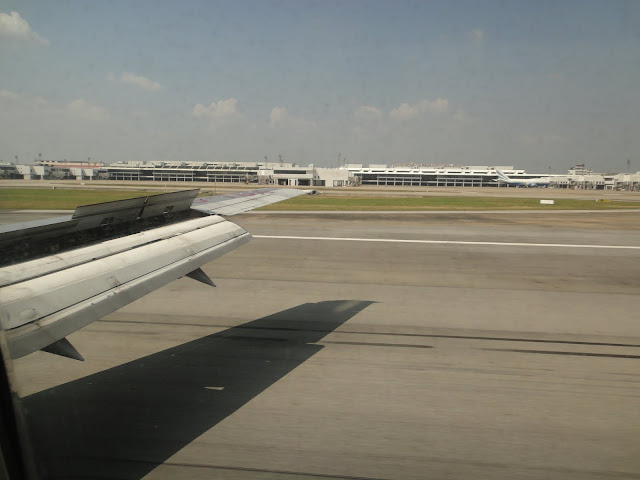 Leaving the neat and nicely colored cabin. As you can see, HS-TDA doesn't carry the rainbow-colored seat pattern that many TG and ex-TG aircraft do. 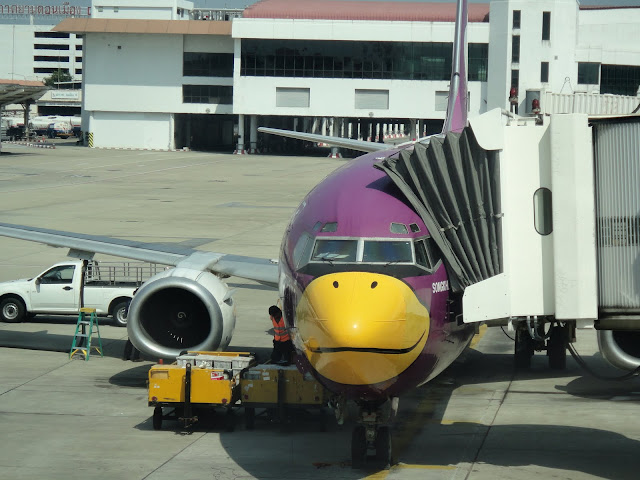 The arrivals hall was actually quite lively, and arrival screens revealed quite busy traffic - even though we didn't notice a single plane apart from ours. Our suitcases arrived within reasonable time, and our pre-booked car and driver taking us to HuaHin waited right outside the baggage claim area.

Thank you for reading!
Posted by Frode at 4:20 PM