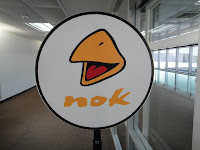 For my blog debut I decided to share some impressions from last November's vacation in Thailand.


Low fares - low service airlines are musrooming even in South-East Asia, but Thailand's NOK Air has decided to place itself a notch above the rest. With its colorful planes, outstanding cabin crew and even offering a free snack, they provide excellent value for money and a fun way to fly, for sure!
This round-trip flight originated at Bangkok's old Don Mueang (DMK) airport and took me to lovely Chiang Mai (CNX) in the north. Thailand's "Northern capital" is definitely worth a few days' visit.

Date of outbound flight: 20 November 2010
Flight number: DD8326
Aircraft type: Boeing 737-400
Aircraft reg.: HS-TDF
Aircraft name: Si Sa Ket
Seat: 14K
My plans have a tendency to change often. This trip was no exception. Thus, I booked my flight a mere two days before departure, and the only available offer was "Nok Plus" at THB3890 one way (approx. 130USD / 95EUR). Booking was a breeze on nokair.com, and a baggage allowance of 15kg as well as the option of selecting my own seat was offered free of charge. Thus NOK Air sets itself off from your average low cost carrier already at time of booking.

NOK Air operates from Bangkok's old Don Mueang-airport (DMK). Conveniently located a 25min taxi ride from downtown, the airport is a shadow of its former self. Where widebodies from all over the world once lined the apron, DMK today is home to a couple of low-cost carriers, some VIP and military flights as well as the occasional charter.
The taxi ride set me back 300 baht (USD10 / EUR7,5), including tollway charges, and upon entering the terminal building I could see that nothing had changed much since the closure and subsequent re-opening of the airport. NOK Air was easily recognizable by its bright yellow staff uniforms and check-in counters.

After a brief screening of my check-in luggage I proceeded straight to the counter marked "Privilege Check-in". Another perk not usually associated with low-cost airlines, but then my ticket also indicated Nok Plus -Nok Air's business class "light" concept.
The check-in counter was dedicated to Nok Plus customers, as well as senators and other high-ranking Thai officials. Luckily there were no politicians around, and the young lady behind the counter greeted me with a corteous "wai" (traditional Thai greeting).

The check-in procedure was done in ten seconds, and I was presented with a grocery store-receipt style boarding pass. I decided to join the Nok Air frequent flyer programme named Nok Air Fan Club - mostly because it's cool that an airline has a fan club! They also sport a quite funny membership card.

Security check was a breeze, and I entered the huge departures hall which was lively but not crowded. A good tip would be to eat something before you pass through security, as the departure lounge offers nothing but a Burger King without any tables or chairs. Eating hamburgers and mayonnaise in the lounge chairs surrounding the gate areas is less than practical.

I could have elected to pass the waiting time with some foot massage - the only activity offered apart from munching hamburgers. However, i opted for some window spotting. The once-lively apron looks more like an aircraft cemetery today.

Nok Air's main competitor - AirAsia - operates a mix of domestic and international flights, and has its Thailand base at new Suvarnabhumi (BKK) airport. Another airline which does operate scheduled flights from DMK is One-Two-Go (by Orient Thai). In this photo, HS-OMD is being prepared for a flight to Chiang Rai (CEI) 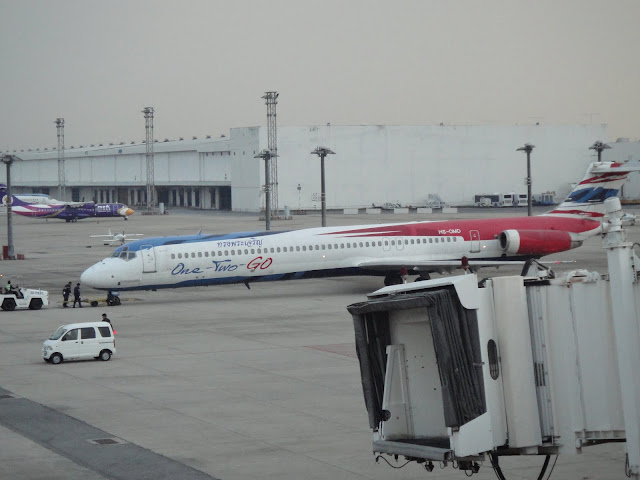 Not excactly the latest equipment here at gate 68 :-D﻿ 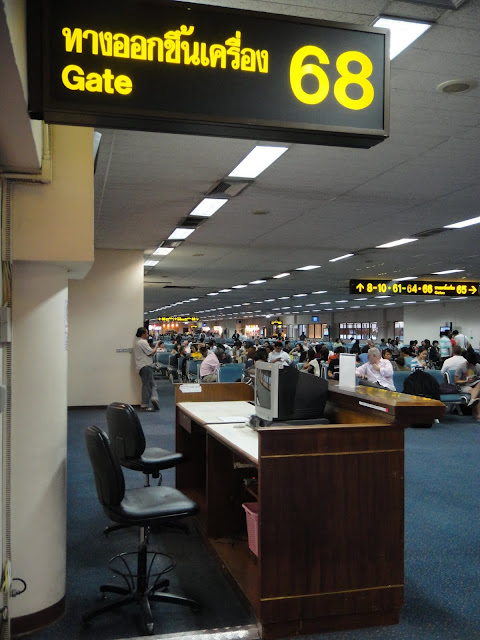 The word Nok means "bird" in Thai, and all aircraft in the NOK fleet are appropriately adorned with colorful feathers and a beak. Moreover, Nok is a popular nickname among Thai people. What could then be more fitting than naming all flight attendants Nok in addition to their given names :-)
The corporate livery of this colorful airline is bright yellow. One might still ask oneself if there is such thing as a standard Nok Air-livery. There is such a variation in plumage that hardly two aircraft bear the same colors. A great fact to the spotter, of course!
Here spotted: HS-TDA named "Songkhla" on its way to Phitsanulok (PHS). This is the one I flew back from Chiang Mai. 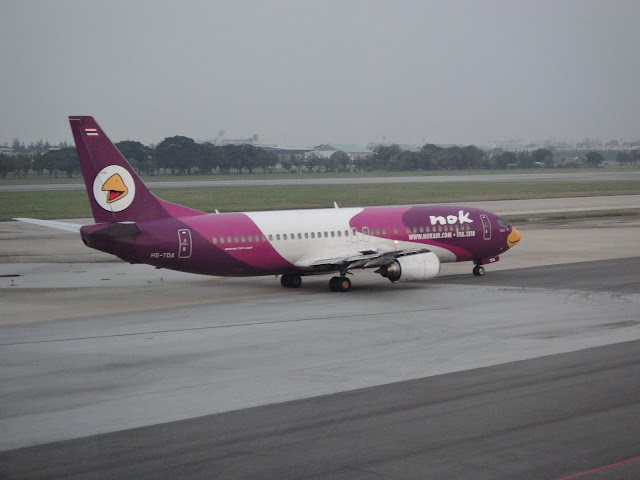 And here HS-DDN, also on its way to Chiang Mai - a mere 30 minutes ahead of us in the tracks (this was one of those public holidays when seemingly all Thais are on the move). 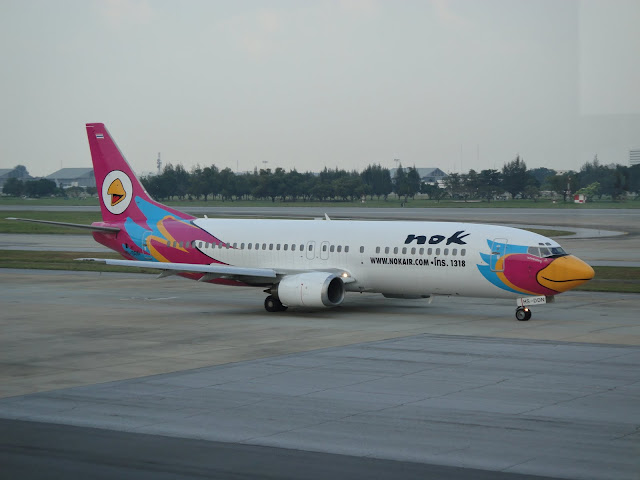 My carriage for the ride, photographed through two layers of windows (there is a boarding corridor in between). 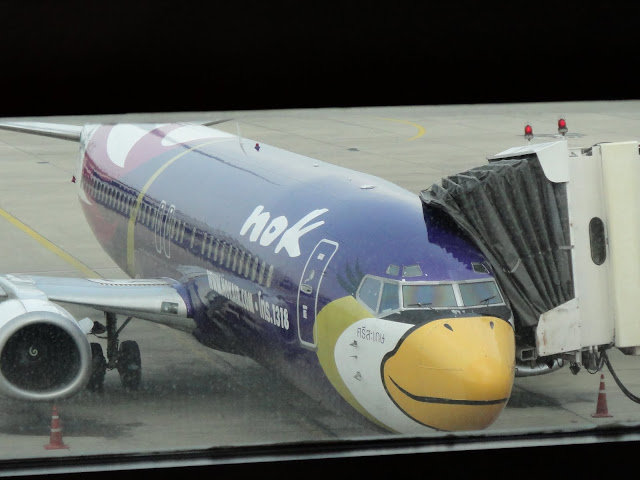 Boarding commenced at 15:50, and we had no problems pushing back on time, at 16:20. Once aboard I was greeted by a beautiful, yellow "bird" named Nok Jimjong (or something to that effect). Her broad smile never left her face, not even while doing her PA announcement.

The cabin was visibly a heritage from previous owner THAI Aiways (which by the way owns 39% of the shares in Nok Air). My Nok Plus compartment at the forward section sported twelve surprisingly wide seats of the old business-class style. Behind the curtain was the all too well-known rainbow-theme of THAI, and it was a full house. I was happy that for a change I was going to take my seat in front of the curtain. 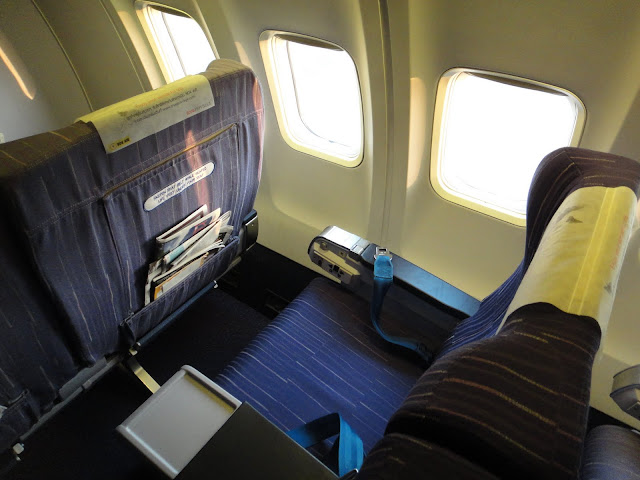 Not much company at the gate anymore...

The numbering of seat rows was a bit peculiar. Nok Plus ranged from 12AB to 14JK, and Nok Economy from 31ABC to 53HJK. I believe this is also an inheritance from the aircrafts' days in THAI Airways service, when they sometimes needed to substitute an A300 on short notice, thus avoiding the dreads of having to re-seat all passengers. Please feel free to correct me if I'm wrong here.

Since there was no other traffic worth mentioning, we started our taxi without delay, and proceeded to runway 01L. In fact it's the first time ever I've taken off in a northerly direction at DMK. In its heyday departures and arrivals were mostly towards the south.


A while into our climb the seat belt signs where switched off, and it was time for a nice little touch I've never seen on any other airline: Each cabin crew member was introduced by name, accompanied by a gracious "wai". Cute!


Not long after, today's complementary service was rolled out - or actually - carried out to be more specific.
The offering consisted of a tray with an Auntie Anne pretzel, a cup of orange juice wrapped in panzer plastic (i suppose this is to make sure all passengers are properly marinated in yellow liquid once the cup bursts open). There was also a considerable amount of wrapping... 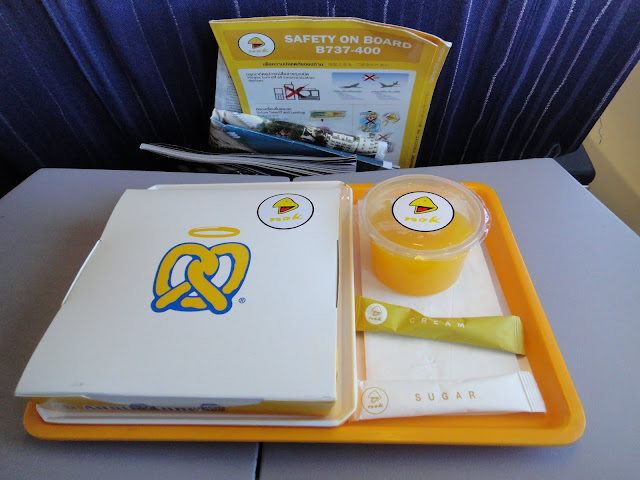 One of the pretzels was a wrapped crab stick (yes, this is Thailand), carrying the warning "Eat it all - leave no evidence." 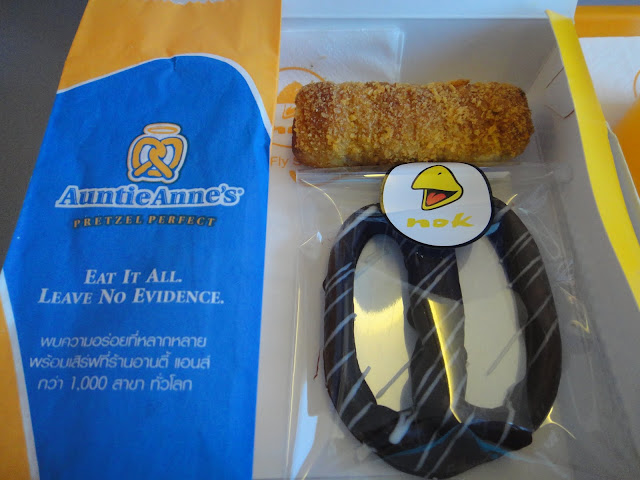 Fortunately, Nok Jimjong did not get mad with me for leaving this particular piece of "evidence". Her smile was as broad as ever while taking orders for coffee or tea from the twelve of us in front of the curtain. And she evidently remembered everybody's preference, because the only cup left on her tray as she reached my corner was the tea I had ordered.

She then rounded off the feast with a glass of water for everyone, followed by her colleague Nok Ae pushing a cart stuffed to the brim with Nok Air-souvenirs. The selection ranged from key chains to umbrellas and shorts, all adorned with the cheerful company insignia.

Beautiful birds-eye view of the rainforest-clad mountains of Northern Thailand.

There was not much time (or need) for anything else on this 1h10min flight. The conclusion of a close-to-perfect flight was a smooth landing on Chiang Mai International Airport's runway 36.
Some snacks parked at CNX:

As previously mentioned, this was a public holiday and the apron at CNX was full. This meant a short bus ride for us. I must be one of the very few airline passengers who doesn't at all mind waiting at the apron. It's a great photo opportunity! 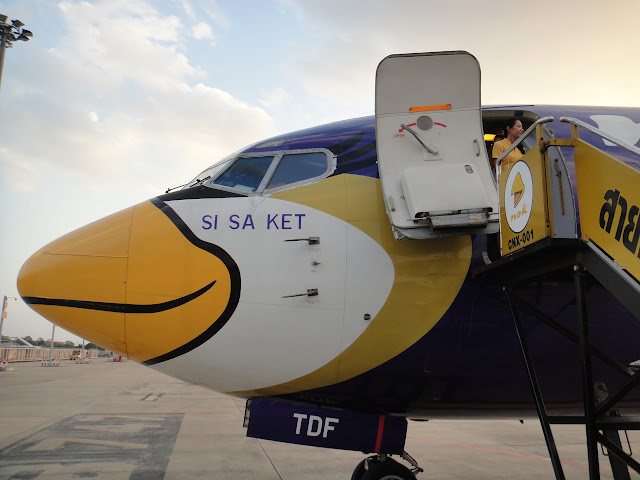 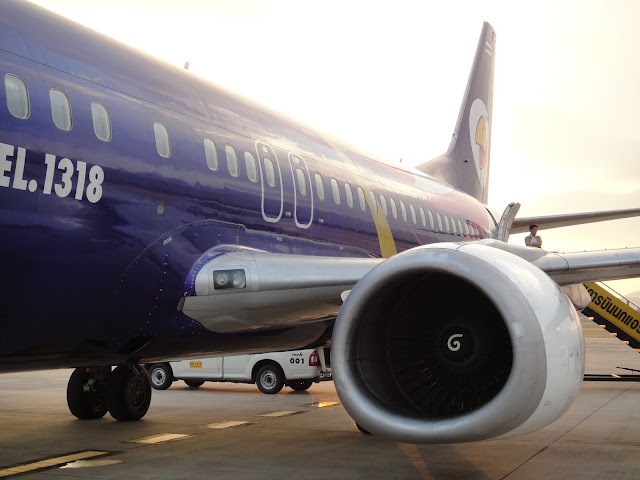 Our "old" friend from Don Mueang: HS-DDN, with the landmark Doi Suthep-mountain in the background. 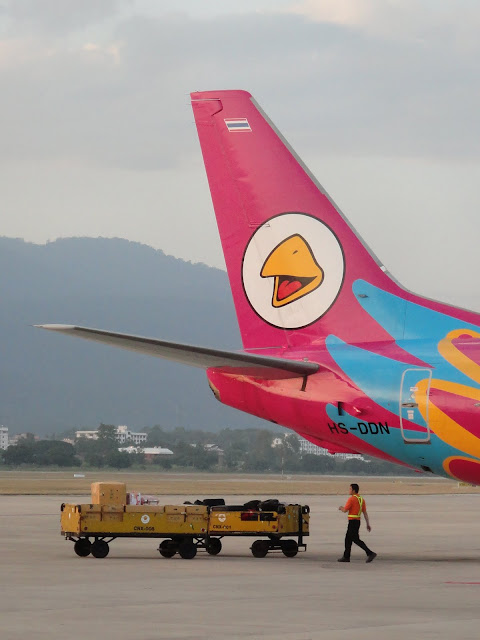 Lined up here is a great example of THAI Airways' variegated fleet, regarding types as well as color schemes. Behind HS-DDN we see HS-TEL "Tepamart" - an A330-300 sporting the Star Alliance-livery. Following this is HS-TKA "Sriwanna" - a 777-300 still painted in the old color scheme. Behind that one an A320 of Thai Air Asia is hiding, and finally we spot the tail of an old friend of mine: HS-TGJ "Hariphunchai", a Boeing 747-400 Jumbo Jet.

HS-TGJ ”Hariphunchai” looks stunning from this angle, but it could use a wash... 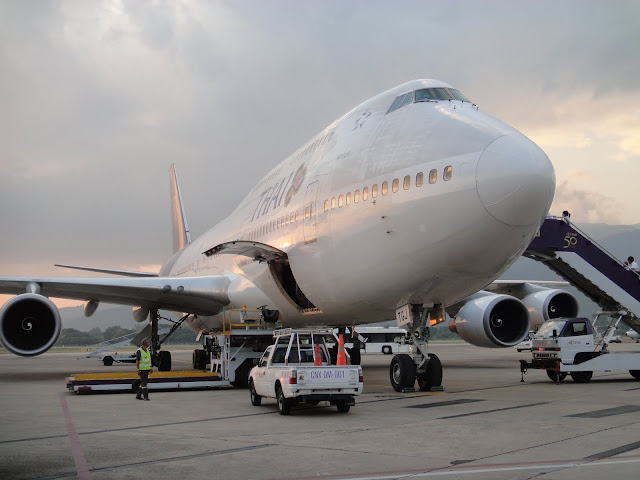 My bag was already on the belt when I arrived at the baggage claim area. I noticed that the nice lady in Bangkok had attached a priority-tag. I don't know if it worked, though. After all, I spent all my priority time taking photos for you, dear reader :-) 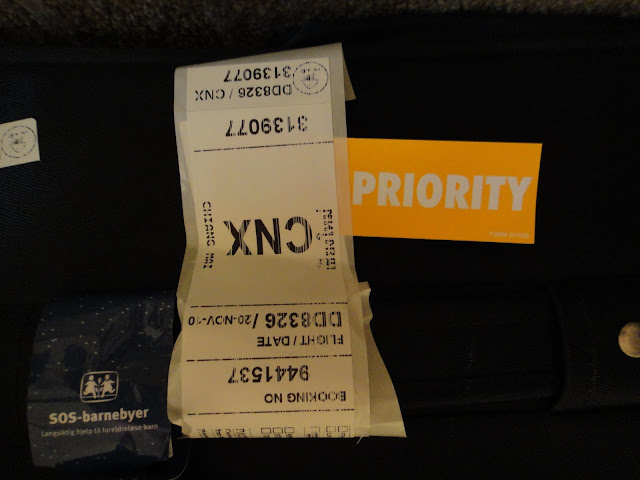 Thank you for reading! If you liked this trip report, please continue to part 2 by clicking here.
Posted by Frode at 7:56 PM