Finally time for this year's summer holiday, and I was really looking forward to two weeks in wonderful France. What better then, than starting off with a flight on France's national carrier? Off to a flying start with the airline that promises to do its best in "making the sky the best place on earth".


I arrived at Oslo Airport Gardermoen bv the Flytoget airport express train witth plenty of time to spare. Check-in was a breeze, with three manned check-in counters and no lines at all.

The usual security check was relatively hassle-free, and after a nice chat with a friend who works at the airport I arrived at gate 39, where my carriage for the ride was already waiting for me. F-HBLC was delivered to Air France subsidiary Regional in May 2007, and is one of ten Embraer 190's in a fleet that comprises more than 50 regional jets from the Brazilian manufacturer. 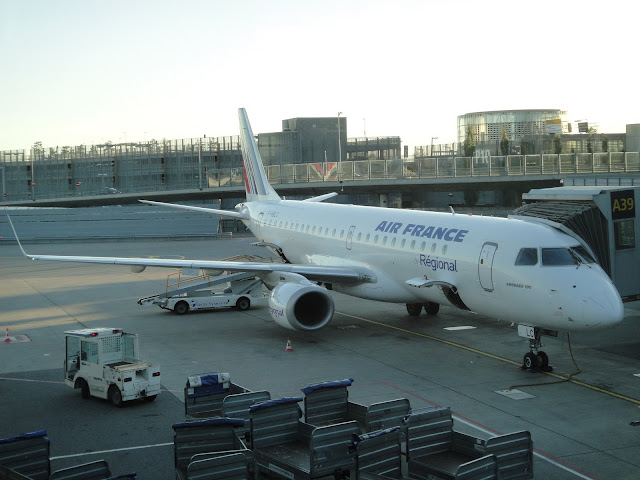 Upon boarding I was greeted by one of the pilots, as well as the male cabin chief . As the flight was about 60% full, I found my seat without delay, and there was plenty of space for my carry-on in the overhead bins.
The 100-seat E190 had a 2+2 seating configuration. Because of the relatively light load, Air France's very friendly ground staff had secured me two seats to myself. The elegant leather-seats had surprisingly ample leg room, and were comfortable enough for the 2h20min ride down to Paris Charles de Gaulle airport. 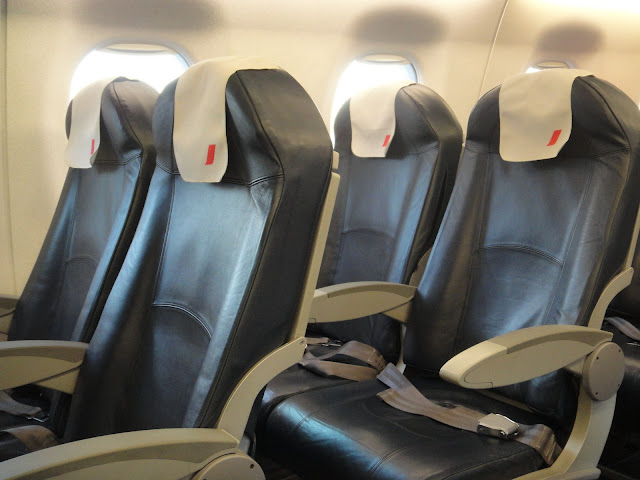 ﻿I took the opportunity to snap some photos before everybody was seated. This "cousin" of my plane was parked at the neighbouring gate; a Finnair E190 sporting the classy new livery of the Finnish national carrier. If you look closely, you may spot the tail of a Continental/United Boeing 757, which had been delayed for technical reasons that day. 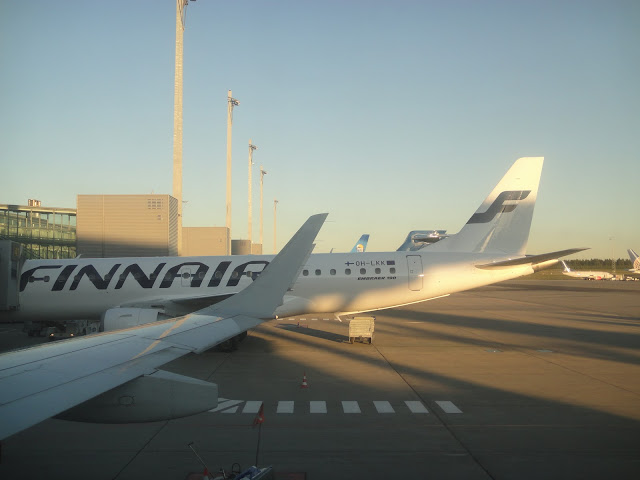 ﻿Moments before "boarding completed". My fellow passengers enjoy French and Norwegian newspapers that were provided free of charge at the boarding gate. 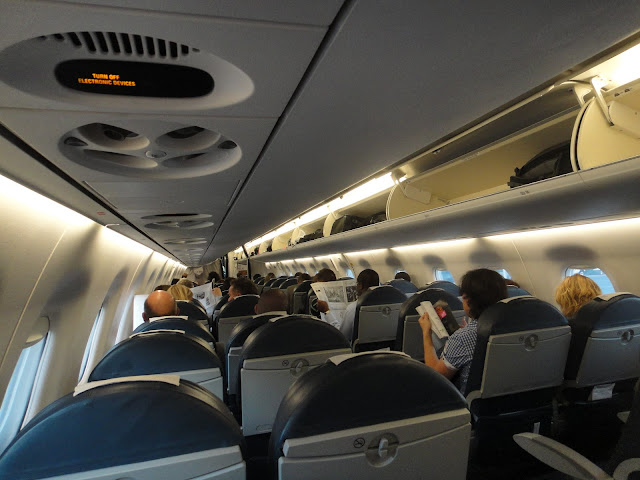 It didn't take long before the seatbelt signs were switched on. The E190 is a relatively new aircraft type, as evidenced by the lack of a "No smoking" sign. It has been replaced by "Turn off electronic devices".

Pushback was 11 minutes before our scheduled 19:10 departure time, and  we held a few minutes on tarmac to allow the cabin crew to perform the usual safety demo. Taxiing out to runway 1R we passed this Dash8-100 of Norwegian regional airline Widerøe, whose only all-year-round international route from OSL is to Gothenburg (GOT) in Sweden. (Sorry for the poor quality, but my window was unusually greasy. Ouch!) 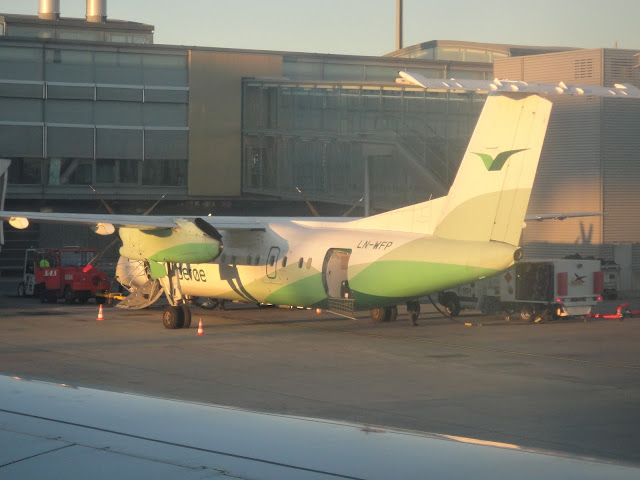 ﻿View from seat 20A as we taxied out to the runway. I like the windows of the E190. They are really big for an aircraft this size, and the seat is quite "low", which provides for a great view. 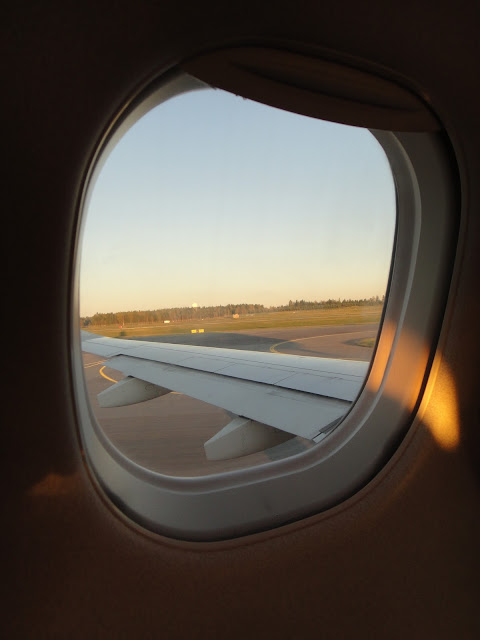 There is plenty of power in those General Electric-engines, and we climbed steeply. Following a series of right turns, we finally set course over the Oslo fjord and headed south towards the European continent. The late afternoon sun reflected beautifully in the left wing as we all settled in for a relaxing evening flight to Paris. 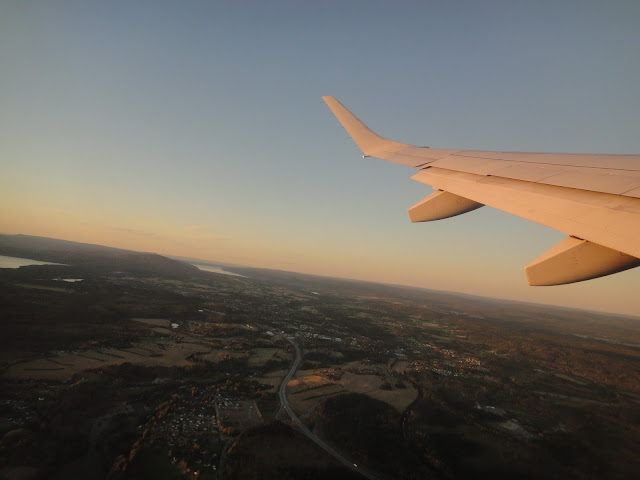 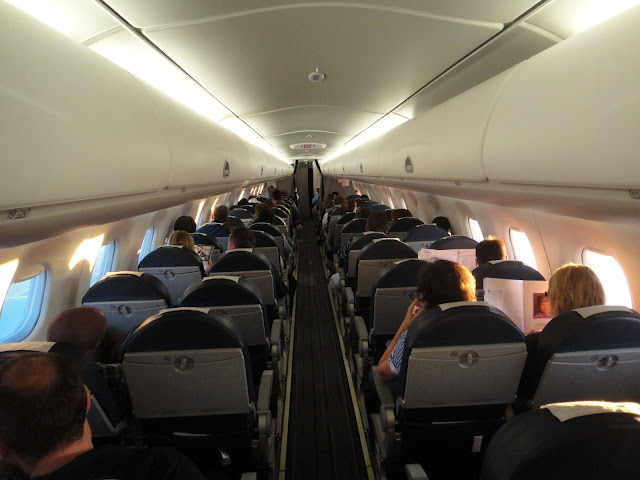 ﻿
It took some time, but finally the female member of the crew came through the economy section of the cabin with today's offerings. What is really nice about Air France, is that they provide free food and wine even in economy class (on long-haul flights even champagne!). I asked if she had white whine, whereupon she answered with a typical, French-accented "Off koorrs". Actually, the wine was a gris-de-gris; something between white and rose, with a pale pink colour. It tasted superbly, and went very well with the salmon-cream cheese sandwich I chose (the other choice was ham and cheese). 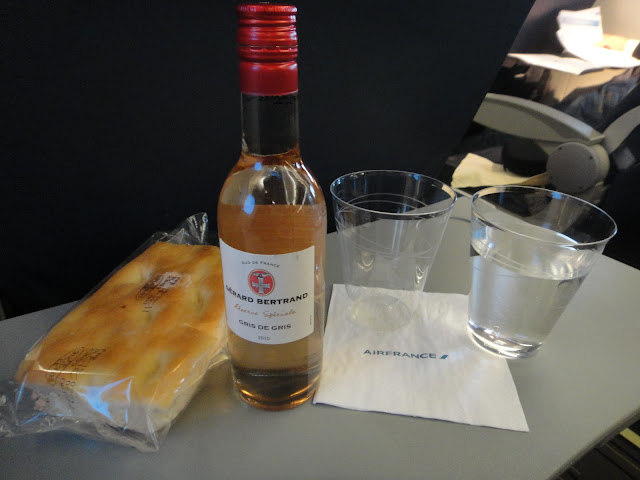 Feeling very relaxed and settling into holiday mood, I tried my luck and pressed the call button to ask for another bottle of this great little wine. Unfortunately they were all out of wine - but the cabin chief offered me a beer instead. Not being a big beer drinker, I politely declined and decided to take a stroll to the rear galley to check out the offerings. Water and orange juice was offered on a self-service basis. 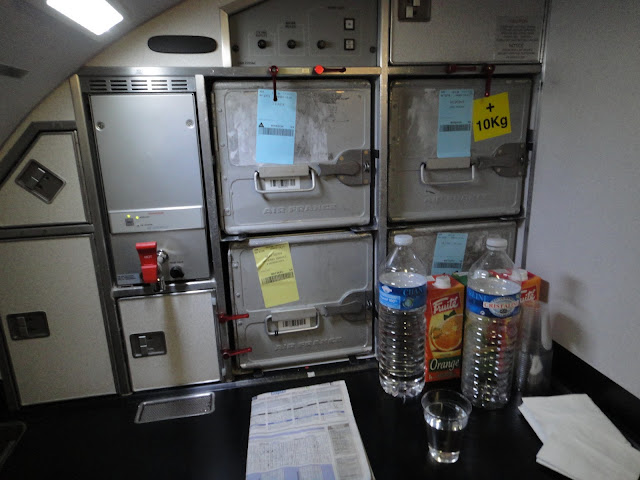 Naturally, there was no inflight entertainment apart from the previously mentioned newspapers. In my seat pocket I also found a well-read copy of the Air France Magazine, featuring a stylish cover and an interesting article about the desert shooting of their new ad campaign: Making the Sky the Best place on Earth.

The magazine also featured an overview of the Air France fleet - both mainline and regional. And of course a lot of fashion ads :-)

After a very comfortable and uneventful flight, we landed smoothly at the huge Paris CDG airport. A lengthy taxi brought us to the regional terminal 2G - located pretty far away from everything else at the site. However, the taxi allowed for some interesting views - among them the Air France Airbus 380 being prepared for an evening flight.
The regional terminal also has its share of spotter opportunities, for example this Airlinair ATR42.

We parked four minutes behind schedule, and the short, uncovered walk from the aircraft to the terminal building provided great photo oportunities. Actually, the lovely ground attendant offered to take my photo in front of the aircraft. I politely declined, but thanked her very much for her friendly offer. 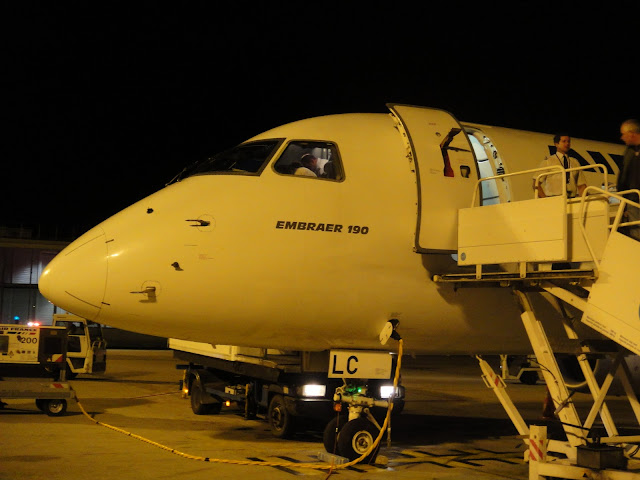 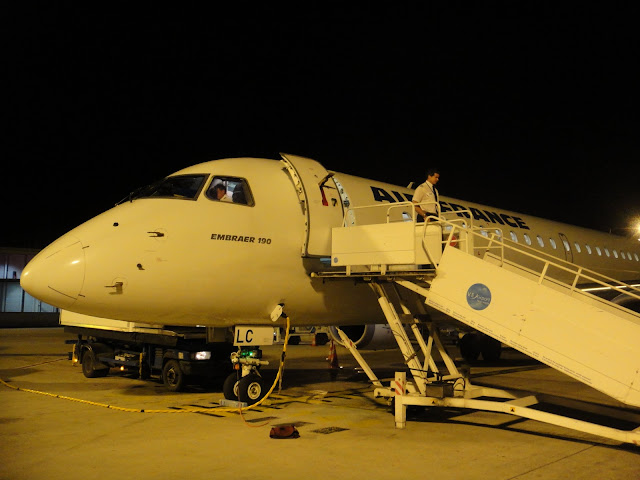 An advantage of arriving at a small terminal building like this, is of course that the walk to baggage claim is rather short. They also provide pretty accurate updates on when your baggage is scheduled to arrive. 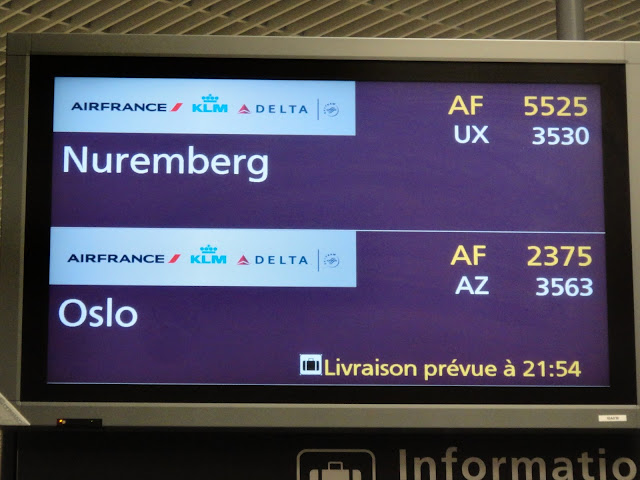 Let there be no doubt as to where we have arrived :-) 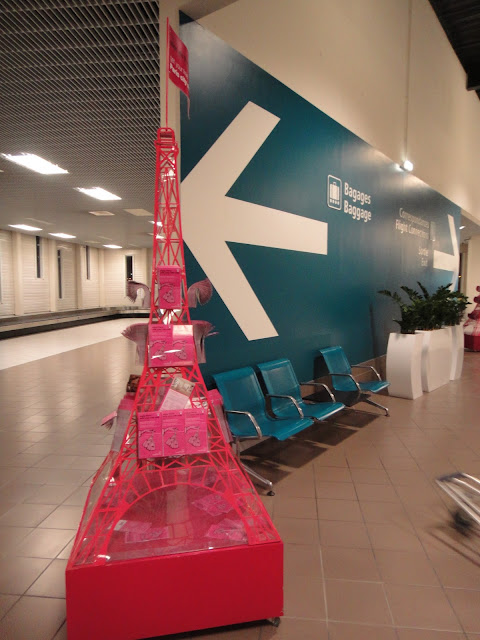 Right outside the terminal building was the Navette (shuttle bus) parking, and in ten minutes' time the shuttle took me to the CDG main railway station and my RER-train bound for Paris.
Conclusion: All in all a great flight. Apart from the greasy window I couldn't find any faults.
Air France's sky is definitely a good place to be.

Did you enjoy this report? Please read part 2 - the return flight - here. That one didn't go that smoothly.
Posted by Frode at 11:12 PM