After two lovely weeks in France we had to return to everyday life in Norway. Unfortunately, not everything went according to plan. But first things first. Read my report from the outbound flight Oslo-Paris here. 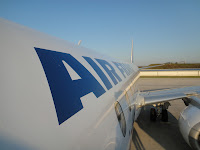 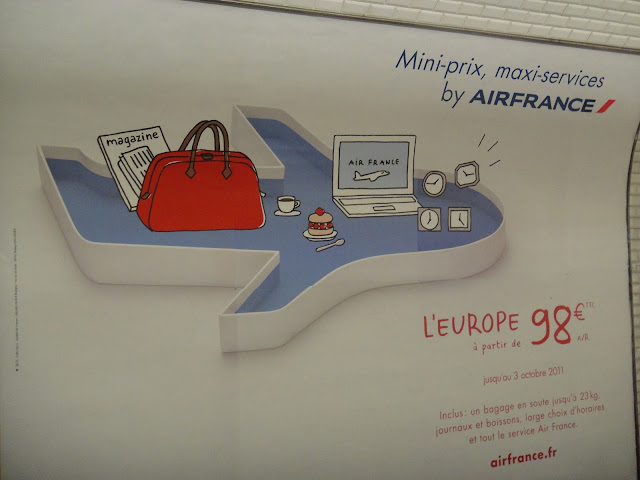 We arrived at Roissy Charles de Gaulle terminal 2 railway station by RER-train from downtown Paris. The hot and stuffed train took about forty minutes from Denfert-Rochereau station and cost 9.20 EUR per person. On a hot summer day this is a less than comfortable way to start your journey, as the trains are extremely hot and packed with local commuters as well as passengers and their luggage. Neither the stations nor the trains are very well adapted to travellers with suitcases.
Upon arrival at the airport terminal 2 "Gare" (railway station) we let a series of escalators and an elevator take us to the top floor, where we were lucky to catch a Navette (shuttle bus) just about to depart. There were plenty of seats and room for our luggage - which was a relief as the onboard screen promised a 17 minute bus ride to terminal 2G via several other terminals at this huge and rather complicated airport.
The 2009 addidion to the confusing layout of CDG, Terminal 2G is located 2.5 km away from the main terminal complex. Even though it takes a while to get there, your reward is that the terminal itself is quite small and easy to navigate. The check-in area was bright and airy, and there were no lines worth mentioning (please note the photos are taken on our evening arrival. There were a little bit more people around when we checked in for our afternoon departure - but it was far from crowded).

Do it yourself from the practical check-in machines, and then there is a short walk to the bag-drop. 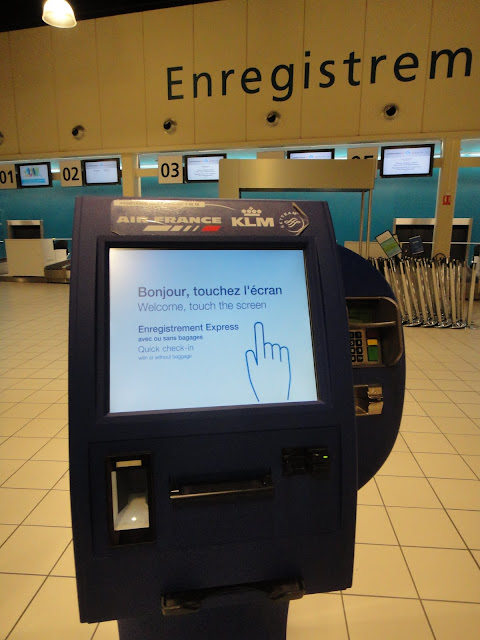 After getting rid of our bags, security was a few paces away. A nice touch were security attendants that made sure the lines moved smoothly. They also sent passengers for flights departing within the next 30 minutes to the priority line, thus minimizing the number of delays related to passengers getting stuck in line.
The departure area was located one level up from security, and had plenty of seats. It still felt crowded this afternoon. This might be attributed to the fact that gates are not announced until 20 minutes before departure time, forcing everybody to linger in the departure area. Especially around the departure screens there was a noticeable athmosphere of stress, as people constantly went back and forth to check the status of their flights.
The area provided a number of reclining chairs centered around electricity outlets, practical for those who needed to recharge their devices. Wireless internet as well as stationary PCs with internet connection were available at a charge.

There was also a modest duty free shop, as well as a bookshop and a bar/restaurant, from which a strong odour of burnt food permeated the entire lounge area. And, let me not forget to mention: The place was HOT!
At 15:25, our flight AF 2374 seemed to be on time for the scheduled 15:55 departure to Oslo. 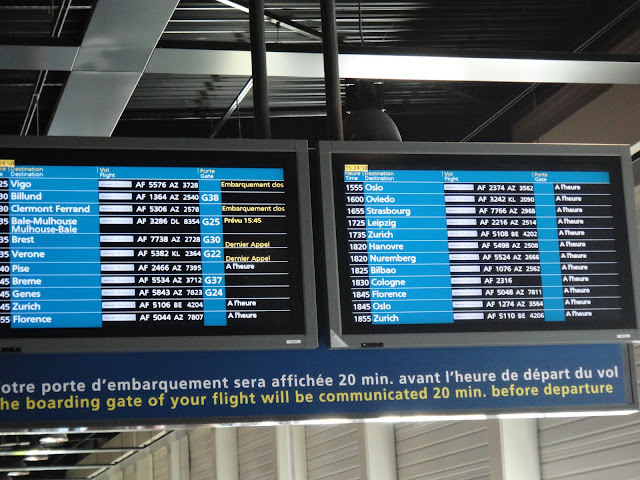 Unfortunately Air France had to announce a technical problem with our flight. Initially they expected a 30 minute delay, but the departure screens kept showing our flight as "A l'heure" (on time). 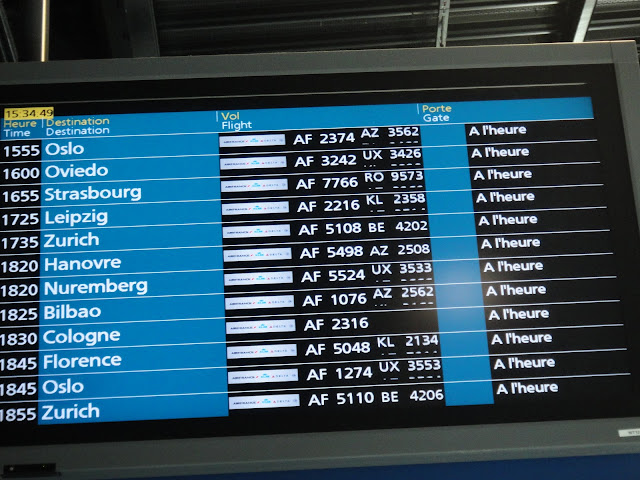 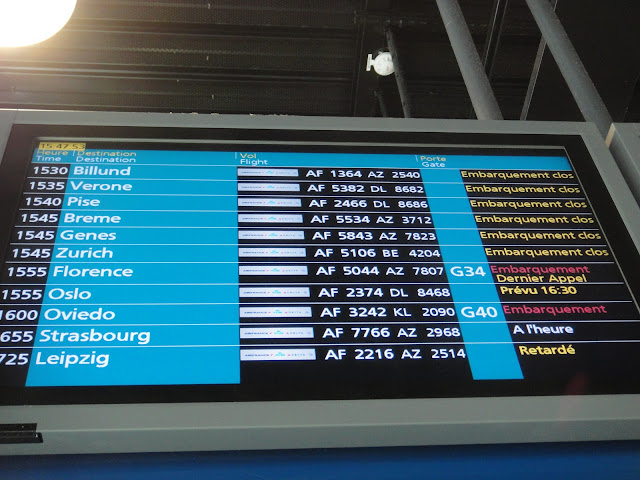 A nice touch was this self-service station where it would be possible to print your new itinerary in case of irregularities. It could also be used to change your seat, among other features. However, we didn't have any use for this, as we got what we needed from real human beings, seated behind the Air France customer service desk. 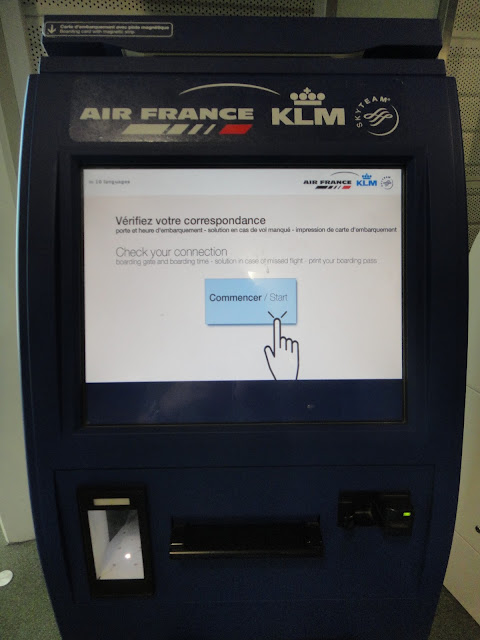 Quite disappointingly, the terminal building is less than ideal for spotting. The planes are separated from the terminal by this walkway leading to the gates. As previously mentioned, moving to the gate area was no option, since nobody could predict which gate their flight would depart from. 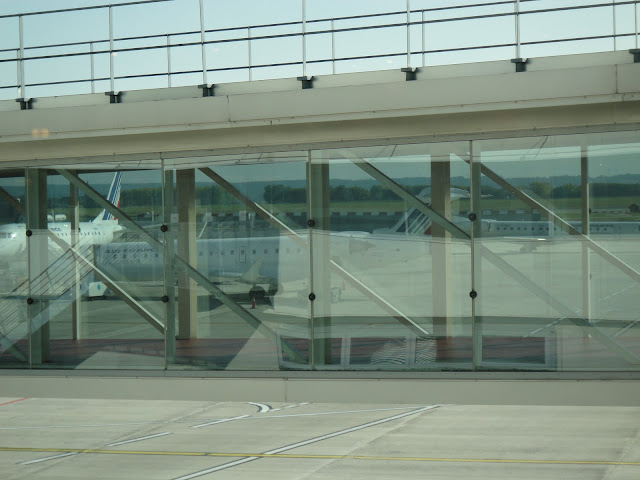 About half an hour after scheduled departure time, the screens displayed gate G40 as "our" gate. Naturally, everybody happily grabbed their carry-ons and walked towards the gate area. I managed to get some decent photos from the glass-encased walkway, and this E190, registration number
F-HLBG,  turned out to be our troubled plane.

Next to gate G40 another Embraer jet was parked, and those in the know might smell trouble as they see this photo :-) 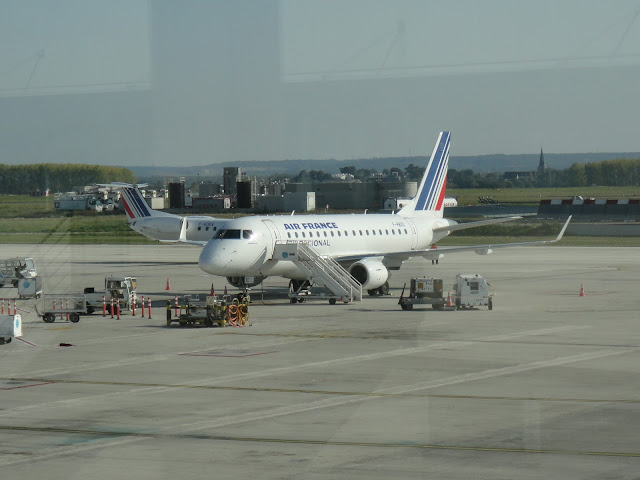 On our way to the gate. Note that all windows are tinted in different shades of colour. 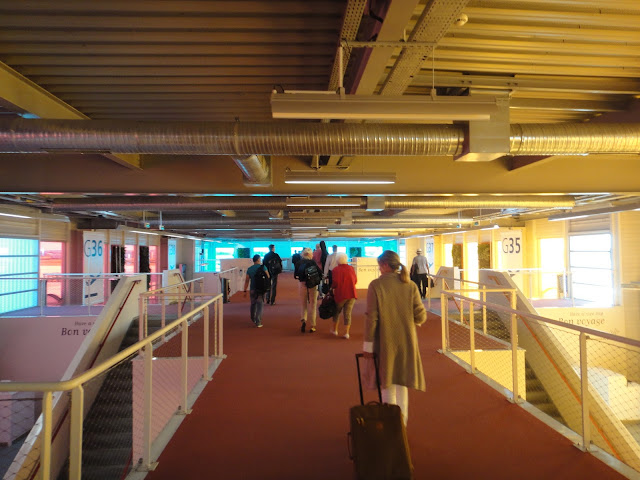 Upon arrival at gate 40, we were met by three Air France ground staff who could do nothing but advising us to go back into the departure lounge, as there would be no departure for a while. It turned out the crew had just arrived, and they had several pre-departure checks to perform before the aircraft could move.
I approached a female member of the ground staff and asked if the aircraft parked right outside the blue window was actually the one scheduled for Oslo, and she responded reaffirmingly. The original aircraft had severe technical problems, and had been replaced by this individual.
I pointed out the fact that this aircraft parked at gate 40 was a bit smaller than the originally scheduled example. Would that have any implications on the availability of seats, or did they have a light load booked this afternoon? She didn't seem to understand the problem, and after conferring with her male colleague in French, she assured me that the planes were exactly the same size. Not being too easy to convince, I insisted that the originally scheduled aircraft was a 100-seat E190, while the one parked just a few metres away from us was the smaller cousin of the family, an E170 featuring no more than 76 seats. In fact, if the nice lady would mind looking out the window, she could clearly see the letters EMBRAER 170 spelled out beneath the co-pilot's side window.

After a few minutes of embarrassed and rather confused typing and looking into the computer screen, the nice lady and her colleague had to agree that this passenger indeed had a point. Moreover, this would actually lead to a lack of nine seats on this flight. However, nothing was written in stone at the moment, and we trodded back to the main building and its customer service counter to pick up a refreshment voucher, courtesy of Air France.
On our way back along the walkway, I got this shot of an Embraer ERJ145 resting between flights. 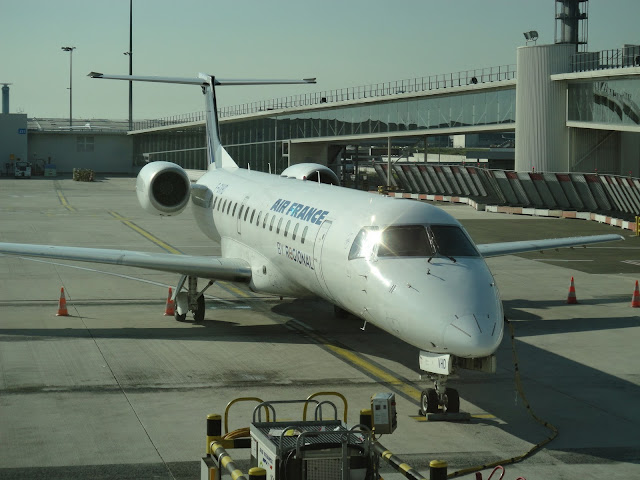 The above mentioned ERJ145 had nice company. City Jet is another Air France-KLM group subsidiary, and operates a fleet of Fokker 50s of former VLM airlines and, as pictured here, Avro RJ85s. London City airport is an important destination for this Dublin, Ireland based airline. 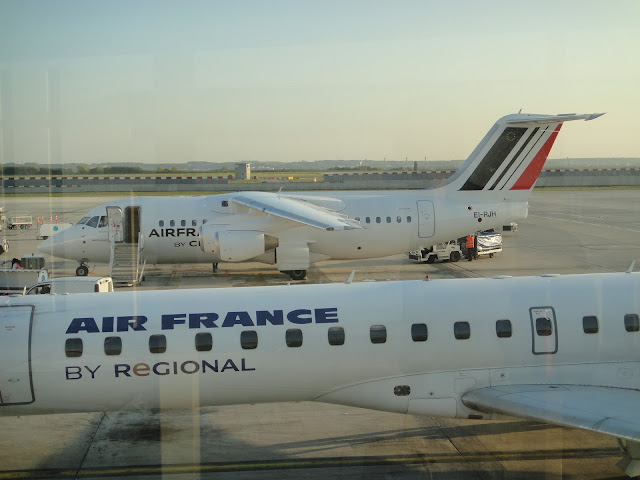 My supposed-to-be fellow passengers crowding the customer service counter in search of alternative ways to get back home. "Missed connection" is not the happiest sounding expression in the world...

As it turned out, the E170 eventually left for Oslo, 95 minutes delayed, leaving several passengers behind. We were among them, but we were issued a boarding pass for the next flight, AF1274, scheduled for departure at 18:45.
This time, Air France kept their promise, and approximately 25 minutes before departure time the screens told us to proceed to gate G36. Boarding was a breeze, and with a genuine smile the gate attendant wished us a pleasant flight.
Again, the tarmac of terminal 2G offered some good spotting opportunities. Pictured here is an ATR72 of Airlinair - flying on behalf of Air France. 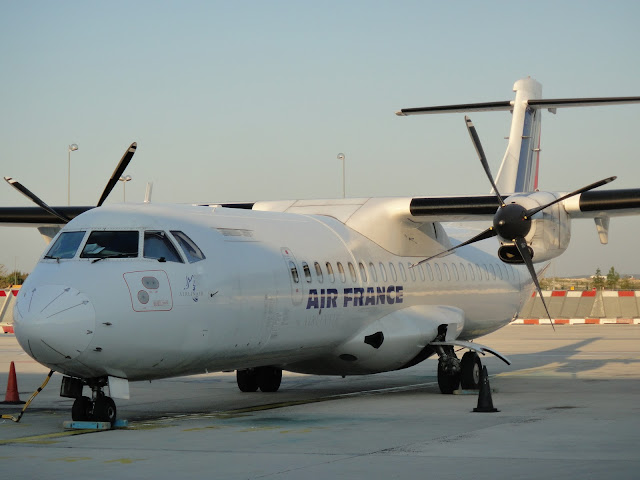 Another CityJet Avro RJ85 being prepared for departure. 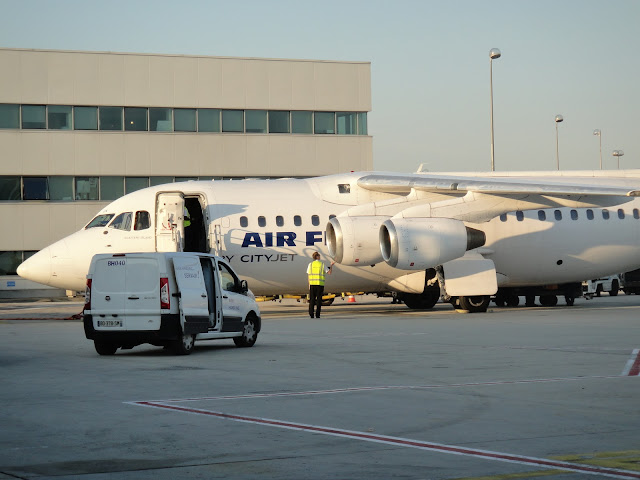 Our Embraer 190, F-HBLB. It was delivered new to Regional in January, 2007 - and has been with the operator since. 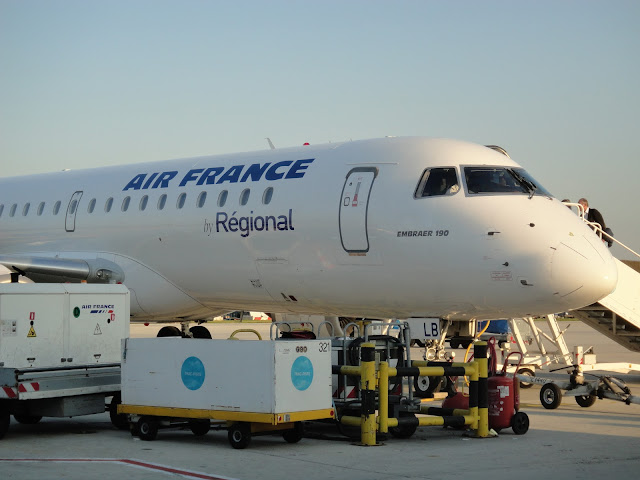 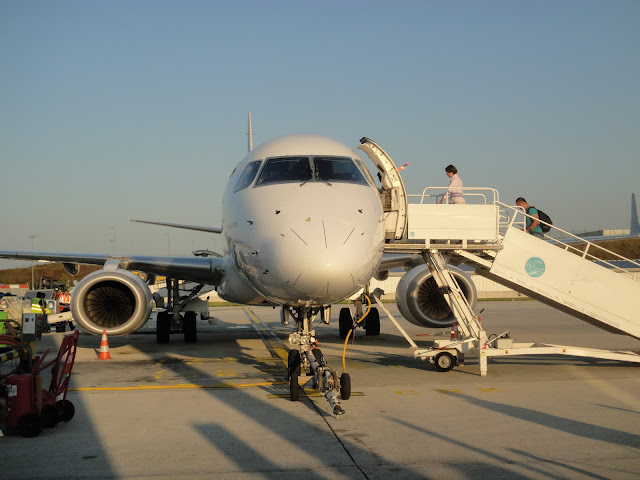 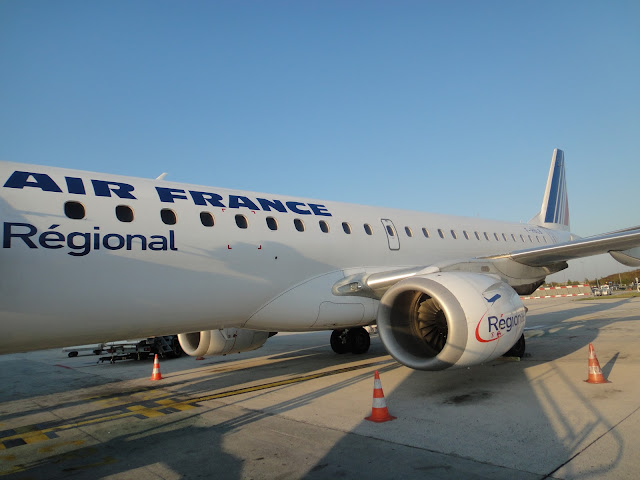 A BritAir CRJ700 being pushed back for departure. 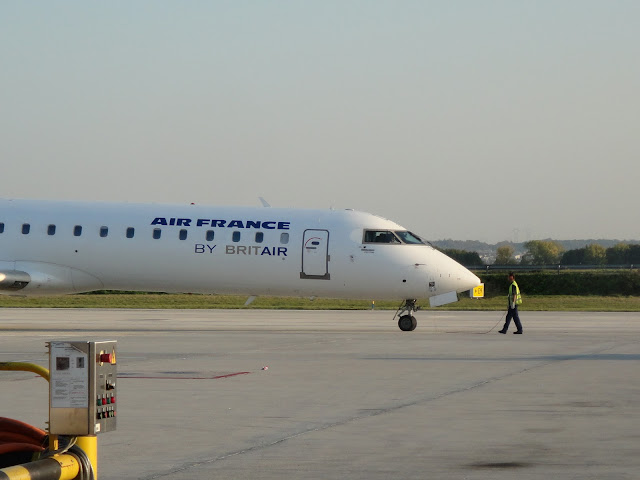 With only 25 minutes to get all passengers from the departure lounge to the gate and onboard, I had my doubts about an on-time departure. However, we were lightly loaded and pushed back four minutes early, beginning a 20-minute taxi around the vast terminal complex of CDG airport.
This must be the crappiest photo ever posted, but if you look really carefully behind the winglet you will see what I saw: A Korean Air Airbus A380 - one of only four in service with the South-Korean airline. The first example was delivered June 1, 2011 and the latest taken over on September 7.

An Air France Boeing 747-400, resplendent in the updated livery. Unfortunately my window at seat 16A was - again - pretty greasy. Clean your dirty windows, Air France! We like view!

Again, the General Electric engines showed their power and sent us skywards like a rocket. My travel companion actually remarked on the steep climb. We got beautiful views of the sunset as we headed north across the continent - and after a while a rather tired looking flight attendant brought us a cart full of goodies. 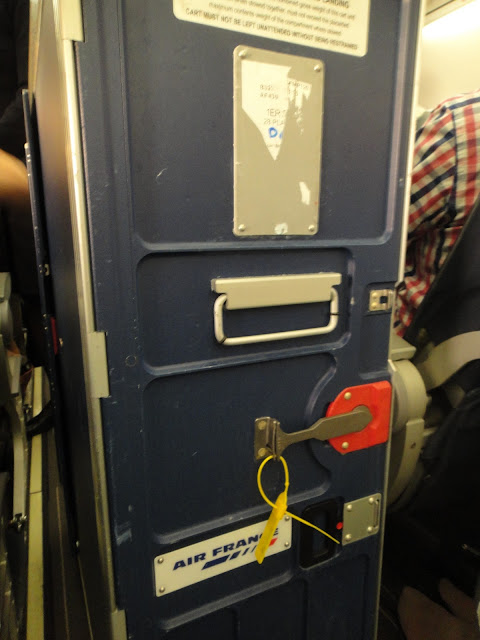 Today's free offerings were a choice of chicken or cream cheese sandwich (I got the chicken), soft drinks and - of course - French wines. I decided to skip the wine after a week of Parisian nightlife, but my travel companion, who is afraid of flying, needed something to calm his nerves a bit. He actually asked for a second bottle, and this was graciously offered with a smile. 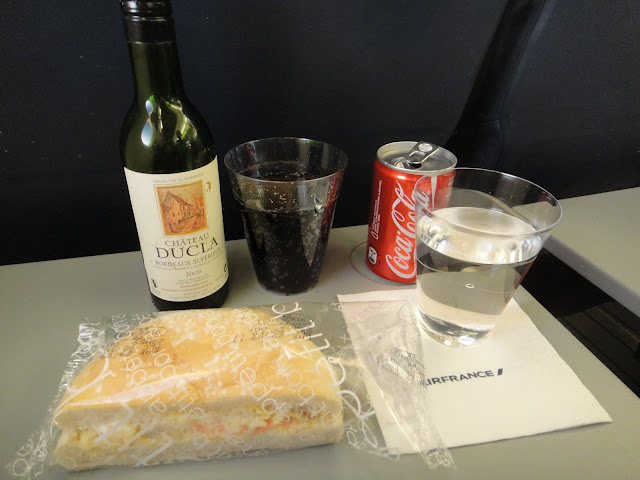 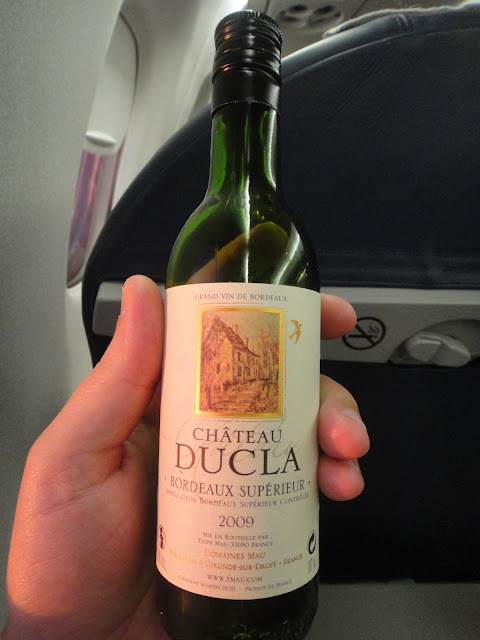 Operating the last Oslo-bound flight of the day, the aircraft would be parked at Oslo Airport until the early morning flight. Our purser obviously wanted to get rid of all food, as any left overs would probably be thrown away upon arrival in Oslo. She therefore offered a second helping of cream cheese sandwiches. Kudos to her for her upbeat spirit and charming smile! 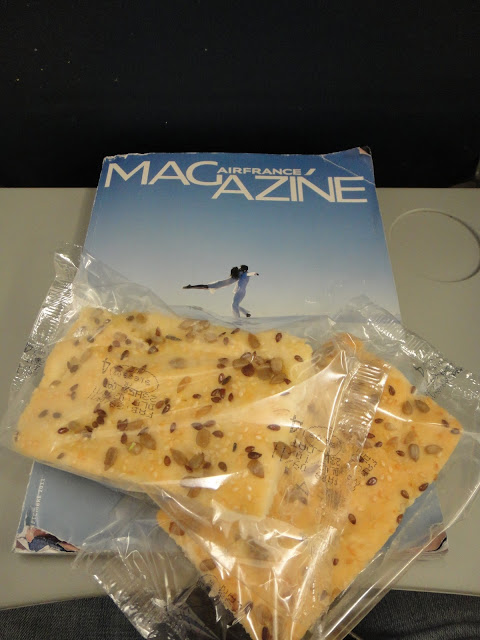 The remaining portion of our flight was relaxing and quiet, as most passengers were probably tired after a long day of travelling. The most noticeable non-event was actually that no word was heard from the flight deck during the entire flight. Not a mention of cruise level or weather at destination. Disappointing!

We touched down at OSL at 20:57, and four minutes later - nine minutes ahead of schedule - we parked at gate A39. Interestingly, this was the excact same gate I had started out from two weeks earlier.


We were quite surprised to see the E170 which had operated the earlier flight - the one we were supposed to have flown - still on the ground, being pushed back for departure as we arrived. A FlightStats search revealed it had arrived 90 minutes late from Paris, and that it now departed 114 minutes behind schedule.
Probably there were quite a few disgruntled passengers and missed connections on that flight :-)

Conclusion: Air France delivers a consistent and good economy product on modern, comfortable aircraft, and their staff do what they can to offer service with a smile. They could have been a tad more in tune with events when irregularities happen, but I guess they also suffer from less than adequate ground facilities at the complex CDG airport.
Thank you for reading! I hope to see you again soon :-)
Posted by Frode at 8:51 PM